By Donald on October 1, 2016 in Uncategorized Do Human Rights Exist in Canada And China?

I was asked that very question this morning, September 22, 2016. I was approached and interviewed by a journalist from Ottawa on Parliament Hill as I was doing my daily protesting with my graphic signs against the Culture of Death (cf:  http://www.aborterrorism.ca/blog/ ) in Canada.

To the right of Parliament Hill was a small group of fervent, patriotic, communist Chinese and to the left was a much greater number of Falun Gong supporters, two very opposing forces.  Falun Gong adherents are very peaceful Chinese people who seek to achieve spiritual enlightment with a moral philosophy centered on truthfulness, compassion and forbearance.

They have suffered tremendous persecution and human rights abuse since 1999 in Communist China.

What brought these two groups unto Parliament Hill at the same time was the visit of Chinese Premier ‘Li Kegiang’ who was meeting with Prime Minister Justin Trudeau. Their meeting was focused on exploring Free-Trade talks between Canada and China. 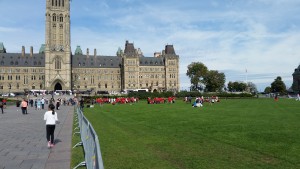 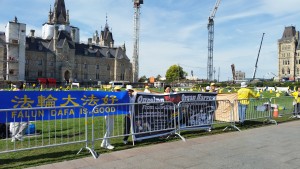 The reporter was genuinely interested in my opinions being that my full time mission and ministry is advocating for ‘human rights’ of our most defenceless, voiceless Canadians, the baby in its mother’s womb. And I now also advocate against Euthanasia and Assisted Suicide which been legalized a few months ago in Canada.

One of her questions focused on a comparison of human rights in Canada and China. I suspect that what prompted her to ask me, a Canadian that question was that when Justin Trudeau visited China on September 1, 2016, he lectured China on Human Rights on Shanghai Stage. (Cf: http://www.huffingtonpost.ca/2016/09/01/trudeau-china-human-rights-beijing_n_11818008.html   )

Trudeau said during his speech :

“I remind everyone that as a country that has seen firsthand the benefits of free expression and good governance–Canada encourages China to do more to promote and protect human rights.”

I was quick to respond to the reporter’s question. I said: “According to my research and knowledge there are  ‘no’ human rights in Canada, nor in China.

I founded my whole argument on the fact that the most basic of all human rights is the right to ‘life’…from the moment of conception to natural death. This right does not exist in Canada and China. For information on annual abortion rates in Canada go to  http://abortionincanada.ca/stats/  . From 1974 to 2010 the total number of ‘reported’ abortions in Canada is 3,191,362. Also see  https://righttolife.to/key-life-issues/  for abortion statistics.

As these two previous links show, 49% of abortions in Canada occur at 9-12 weeks when the baby has fingerprints, urinates in utero, squints, swallows, wrinkles his or her forehead, sleeps, wakes and exercises. During abortions, babies are ripped to shreds and torn apart piece by piece. ISIS (Islamic Jihadists) does its butchering of humans in public view. In Canada, it is done behind closed doors (out of sight out of mind) by legalized serial killers. The world calls them ‘abortionists’. I call them ‘aborterrorists’. The worst kind of terrorist on the face of the earth.

Communist China, for decades has limited Chinese families to only one child. ( cf:        http://geography.about.com/od/chinamaps/a/China-One-Child-Policy-Facts.htm    ) ( cf: www.womensrightswithoutfrrontiers ) Only since October of 2015 has China changed to a ‘two child’ policy.

Now for Canada, the country that boasts to China of its human rights. In my opinion, as a Catholic, as a Christian I state and I hope my words reach the ears of our Prime Minister Justin Trudeau…”There are absolutely NO Human Rights in Canada.”

As I just said and I repeat: “The most basic of all human rights is the right to ‘life’…from the moment of conception to natural death.” I am ashamed a a Canadian to say that Canada is the only country in the world without any laws restricting abortion. Preborn babies in Canada can be legally aborted at any stage of pregnancy–right up to birth. ( cf:   http://abortionincanada.ca/stats/   )

Also just as Falun Gong is heavily persecuted in China, we as Christians in Canada are increasingly having our ‘freedom of expression’ attacked. The LGBT Agenda in Canada is vehemently committed to completely silencing any criticism whatsover of their deadly and sinful lifestyle (cf: http://striveforheavennow.ca/the-gospel-of-life/sin-sex/ ) A prime example of this is a recent $104 million dollar lawsuit by the LGBT against a Mr. William Whatcott and those who helped him. Mr Whatcott and a half dozen supporters infiltrated the Gay Pride Parade in Toronto this summer to distribute 3000 ‘Gospel flyers’ in order to reach the LGBT with the Truth about homosexuality and of the lifesaving and lifetransforming message of the Gospel of Jesus Christ. He is presently trying to raise money to defend himself against this lawsuit. The outcome of this lawsuit will be an extremely important test on ‘freedom of Expression’ in Canada.

We as Christians need to reach out to the LGBT who are embedded in a sinful and deadly lifestyle with the Truth in Love. The LGBT agenda is to “Undo Gender” and to “Dissolve” the Identity of Man and Woman and Family.” (Cf:  http://striveforheavennow.ca/blog-love-the-truth/  ) 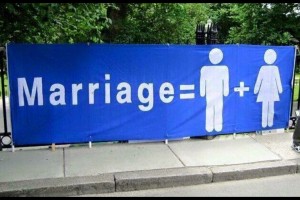 Another example of attacks against freedom of expression is the attack against the Christian Heritage Party after they had installed ads against transgender bathrooms at bus shelters. CHP is now taking the City of Hamilton to court to defend their freedom of expression. (   https://www.lifesitenews.com/news/christian-heritage-party-sues-city-of-hamilton-over-removal-of-transgender )

Vicki Gunn, Executive Director of CHP addresses this issue of our freedom of expression. She asks the question:

“What do our freedoms mean to us? Are they worth fighting to retain or should we just pack up and acquiesce to the strident voices that place limits on what we say or do?”

Gunn goes on to say that according to Article 3 of the Criminal Code we may speak the truth even if it is offensive to some people. In an age where the powers that be take the truth for a lie and a lie for the truth our freedom of expression is in great danger.

Judicial activism has been Canada’s greatest threat against our freedom of expression. To get a great insight as to how the Supreme Court of Canada has robbed Canadians of their rights and transformed Canada into a secular humanistic society read an excellent talk given by ‘Gwen Landolt’: : “The Courts Have Changed Canada’s Judeo-Christian System.”   ( http://www.realwomenofcanada.ca/wp-content/uploads/2012/07/FINAL-SPEECH_for-website-Changing-Canadas-Christian-Culture.pdf  )

Because of the Supreme Court’s judicial activism we have abortion, same-sex marriage, pornography, drug injection sites, euthanasia, etc. Canada is embedded in a horrific ‘Culture of Death’. Canada is a DYING NATION. 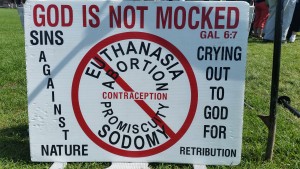 As Gwen Landolt says at the end of her conference talk: “The Charter has relegated the Canadian public to be an observer or onlooker in determining our nation’s laws, which are now solely decided by the nine, appointed and unaccountable judges on the Supreme Court.”

Now getting back to my interview with the journalist. I then proceeded to bring my Christian faith into my answer on human rights. I said to her, as I held my sign up, stating: 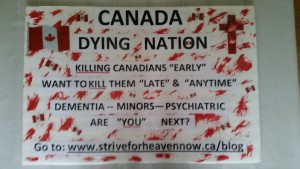 “Myself, as a Catholic (while pointing to my Cross) serve a God of ‘Life and Love’, not of ‘Death and Killing’. My Catholic Faith teaches me to love God with all my heart and soul and to love my neighbour as myself, not kill him.

The people of Canada and China need to turn to Jesus Christ who is “the Way and the Truth and the Life” (cf: John 14:6) Only then will they quit oppressing and killing their people. There are two forces in the world, ‘Good and Evil’, ‘God and the Devil’.”

In John 10:10 we see the stark contrast between God and the Devil. “The thief cometh not, but for to steal, kill and destroy. I am come that they may have life and have it more abundantly.”

Those people, such as Prime Minister Justin Trudeau and the Justices of the Supreme Court who advocate for a ‘Culture of Death’ in Canada are pawns in the hands of the Devil. In my Open Letter   (  http://striveforheavennow.ca/open-letter-to-justin-trudeau-prime-minister-of-canada-by-donald-andre-bruneau-b-th-m-pth/ ) to Justin Trudeau on November 22, 2015 I said that his future destiny was Hell, unless he quickly repents of his advocacy for abortion and euthanasia which has and will claim millions of innocent lives.

The political leadership in Canada and China are forgetting the most important thing, that   ‘at any moment’   their life on this earth will be over and they will immediately appear before the Judgment Seat of Jesus Christ, the King of Kings and the Lord of Lords.

“And it is appointed unto men once to die, and after this the judgment.” (Hebrews 9:27) They will be judged on the first two commandments:

God created us to    ‘love’     Him and one another, not kill and destroy one another. There are serious and eternal consequences for those who ignore God’s Commandments and the basic human right…the ‘Right to Life’ of other human beings. ( CF: http://striveforheavennow.ca/perfect-love/ )